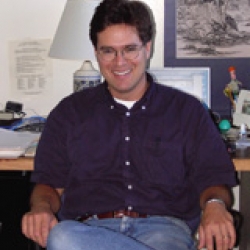 My research group focuses on materials with applications in the production of energy and environmental remediation.  We prepare thin films (< 1 μm) of semiconductor materials such as titanium dioxide (TiO2), pyrite (FeS2), and molybdenum disulfide (MoS2) that can be used in photovoltaic cells, the production of H2 from water, and/or the production of reactive oxygen species for the decontamination and purification of water.  We also prepare zeolite and titanium-doped zeolite films for use as CO2 reductants.  The idea is to react CO2 with H2O in the presence of Ti-zeolites and UV light to prepare useful fuels such as methanol and methane. All of our materials are prepared using hydrothermal synthesis methods and characterized with X-ray diffraction (XRD), scanning electron microscopy (SEM), optical spectroscopy (UV, visible, NIR, IR), solid state NMR, a.c. and d.c. conductivity, ellipsometry, contact angle goniometry and electron paramagnetic resonance (EPR).

Semiconductor Thin Films. The anatse phase of TiO2 is of particular interest because it is nontoxic, prepared from earth abundant elements, and is particularly effective as a photocatalyst.  In recent work, we have shown that oriented anatase TiO2 thin films can be prepared that have ~100% {001} facets at the surface of the film (Figure 1).  This reactive surface is useful for generating H2 gas from H2O (water splitting) and creating abundant reactive oxygen species (ROS) such as hydroxyl radicals in aqueous solutions under UV illumination.  In addition to the generation of H2 for energy and ROS for water purification, our TiO2 films also have applications in solar cells, anodes for lithium ion batteries, and photoelectrochemical catalysis.

The two metal chalcogenides, FeS2 and MoS2, are intriguing semiconductors for use in solar cells and H2 production, respectively.  The pyrite phase of FeS2 has a large absorption coefficient in the visible region of the spectrum and thus could be used to prepare thin absorbing layers for photovoltaic cells.  The layered MoS2 structure is a known desulfurization catalyst but is also effective at splitting water using visible light.  We are in the process of preparing thin films of both of these materials and then testing them for their potential use in solar cells and H2 production.  The long-term goal of the TiO2, FeS2, and MoS2 research is to develop functional nanomaterials that exhibit enhanced activity for the production of energy and environmental remediation under visible light.

Zeolite Thin Films. Another area of interest is in the preparation and characterization of titanium doped zeolite films. Ti-MFI and Ti-BEA zeolites have been shown to be excellent oxidative photocatalysts for selective oxidation of organic compounds. In addition, Ti-zeolites may have promise for the conversion of CO2 to methanol and other small organic compounds when photolyzed in the presence of water. Thus Ti-BEA and Ti-MFI may serve as photoreductants as well as photo-oxidants. The goal of this work is to develop methods for the growth of continuous thin films of these two zeolites, MFI and BEA, doped with varying amounts of titanium. Our goal is to explore the photo-reduction of CO2 with water and UV light and to improve on the photocatalytic efficiency of these materials.

1992 - 1995 Japan Society for the Promotion of Science, Postdoctoral Fellow